Five Cricketers of the Year: 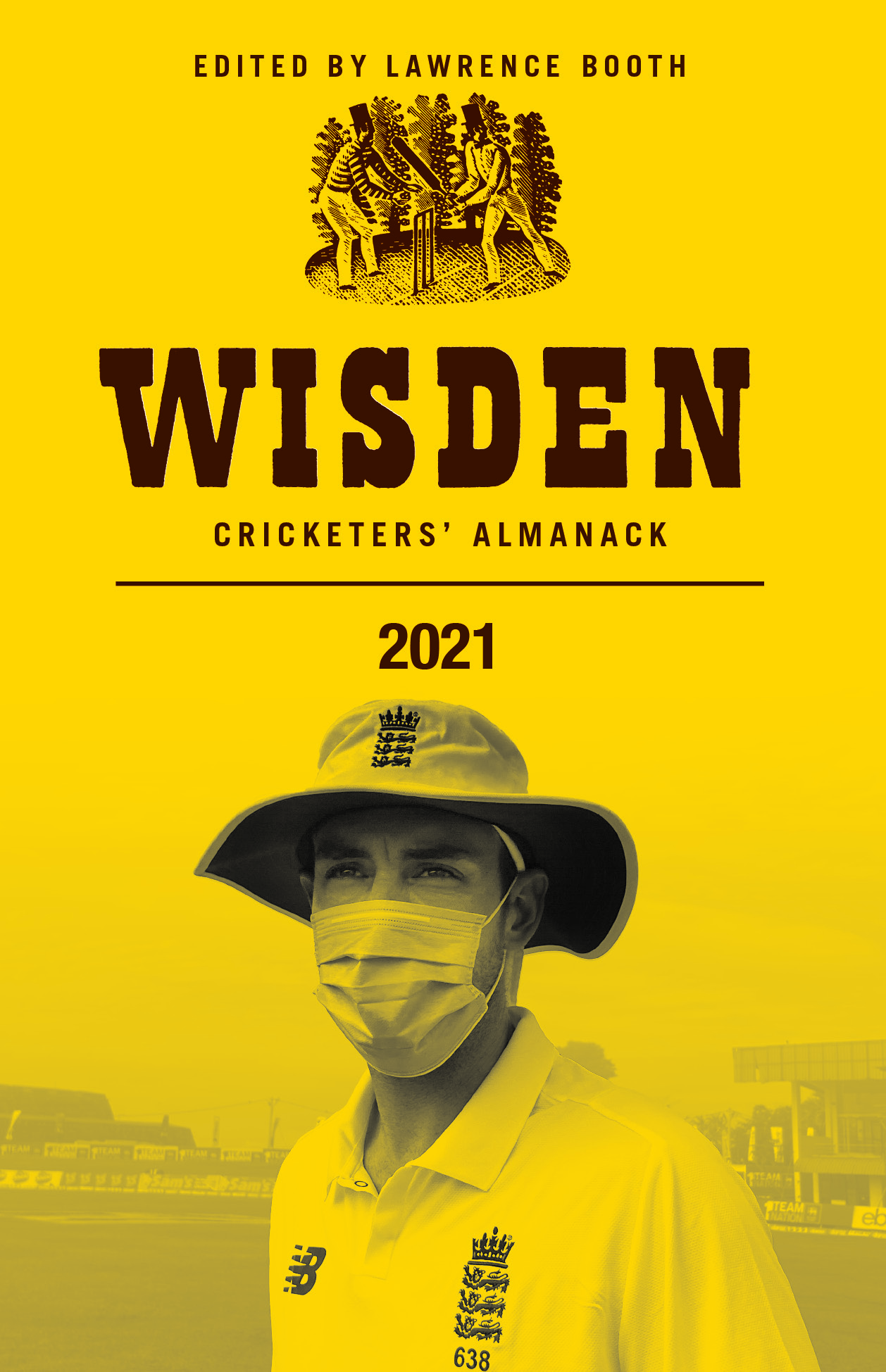 In his Editor’s Notes, Lawrence Booth:

· Criticises the continued financial inequalities in the international game

· Welcomes the return of live Test cricket to terrestrial TV, and suggests Channel 4 should cover one Test a season

· Argues that Bristol should erect a statue of W. G. Grace

The Leading Cricketer in the World:  Ben Stokes

Booth says: “Ben Stokes becomes the first England player to be named Wisden’s Leading Cricketer in the World more than once, retaining the title he claimed in 2020. His haul of 641 Test runs at 58 in the calendar year was more than anyone else, while his 19 wickets cost just 18 apiece. He did it all against a backdrop of personal tragedy: his father, Ged, died in December at the age of 65.”

Darren Stevens named a Cricketer of the Year at 44, the fourth-oldest on record

“Darren Stevens is Wisden’s oldest Cricketer of the Year since Leicestershire’s Ewart Astill in 1933. His 29 Bob Willis Trophy wickets for Kent at an average of 15 confirmed his status as one of the domestic game’s most unsung heroes.”

Steve Waugh wins the Cricket Photograph of the Year award

Former Australian Test captain Steve Waugh has won the Cricket Photograph of the Year award, with his image of children playing cricket among sand dunes near Osian, India. The award is judged by an independent panel, led by former Sunday Times chief sports photographer, Chris Smith, and the award-winning cricket photographer, Patrick Eagar. A keen amateur photographer during his career, Waugh took the image as he travelled around India making a TV documentary, “Capturing Cricket”. 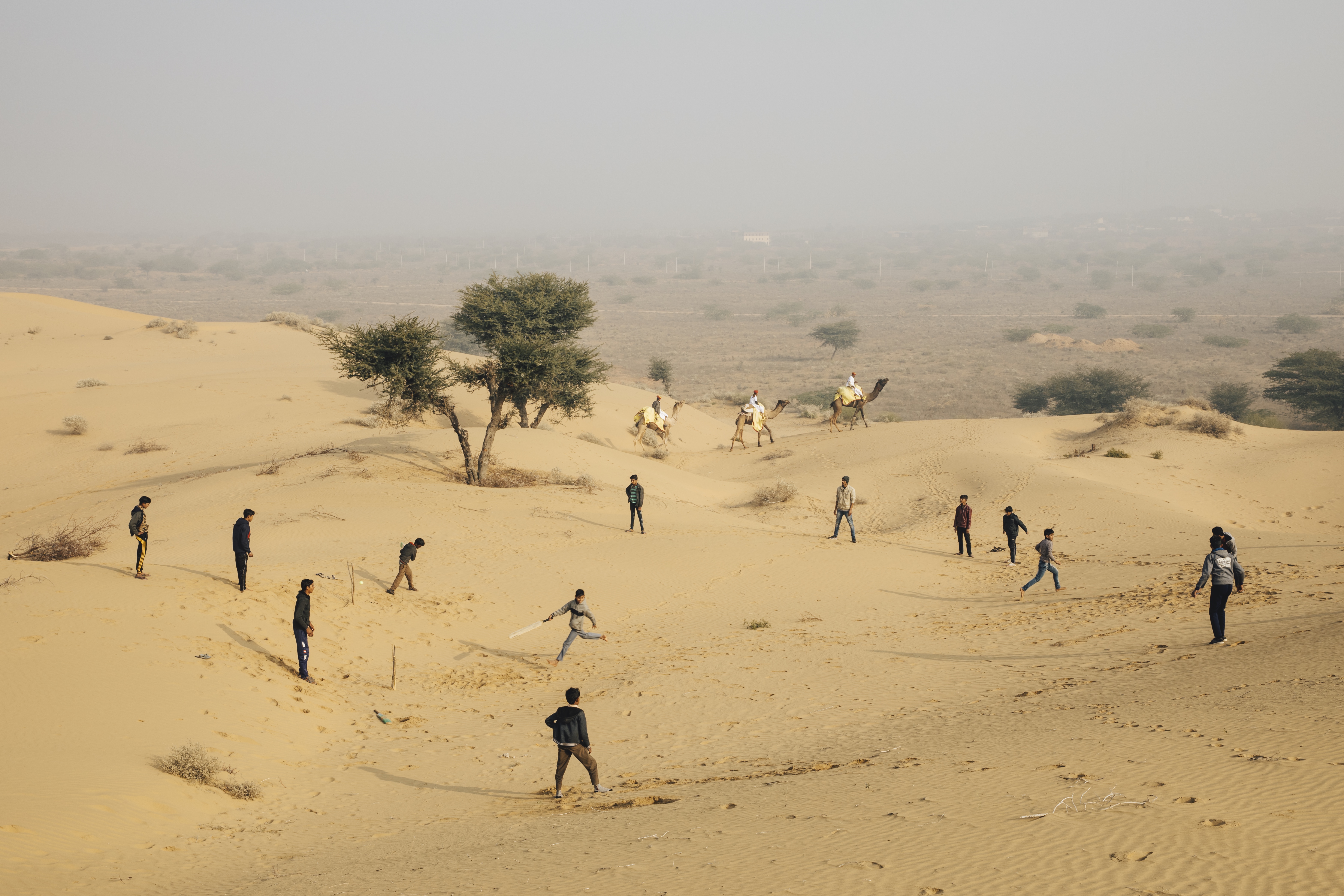 Winner of Wisden Cricket Photograph of the Year 2020 - Steve Waugh

Extracts from the Notes

“Cricket, like everything else, had its heart ripped out… It lost family and friends.”

Booth writes: “Cricket has never been less important than in 2020 – and never more. As coronavirus spread, it seemed frivolous to wonder when the season might start, or whether anyone would be there to watch; months later, with the UK’s death toll into six figures, even writing about runs and wickets felt wrong.

“The pace of events was dizzying, shocking. David Hodgkiss was the Lancashire chairman when Wisden 2020 was printing; by publication, he had died. And the obituaries this year include at least 15 others linked to Covid-19. They were all ages, and from every corner of the game. Lee Nurse was just 43, and had played for Berkshire. Riaz Sheikh, a former leg-spinner who was 51, once dismissed Inzamam-ul-Haq. Phil Wright, aged 60, was Leicestershire’s popular dressing-room attendant. The 73-year-old Chetan Chauhan will always be four decades younger, dragged by Sunil Gavaskar towards the pavilion after an lbw decision in a Test at Melbourne. Ken Merchant, a member of The Cricket Society, died at the age of 81, on the same day as his wife, in the same Southend hospital ward. Peter Edrich, cousin of Bill and John, was 93.

“How did cricket go on? The trite answer is it had to; those above would have had it no other way.”

“At the end of West Indies’ tour of England, Jason Holder spoke passionately about inequality in the game, and demolished one of the early platitudes about the virus’s spread – that it was indiscriminate, affecting pauper and prince alike. The figures proved this was not the case, and so did cricket.

“A predictable theme emerged. England had been grateful for the visits of others, then left South Africa in a hurry, even after two positive Covid-19 tests in their own camp proved false. Australia snubbed Bangladesh, Zimbabwe, West Indies and Afghanistan – but travelled to England, and moved heaven and earth to accommodate India (who had already cancelled series against Zimbabwe and Sri Lanka). At the last minute, the Australians then called off a Test tour of South Africa, who had bowed to numerous demands. The Sri Lankans – who did visit South Africa – insisted on strict quarantine rules for Bangladesh, who stayed at home, but relaxed them for England.” 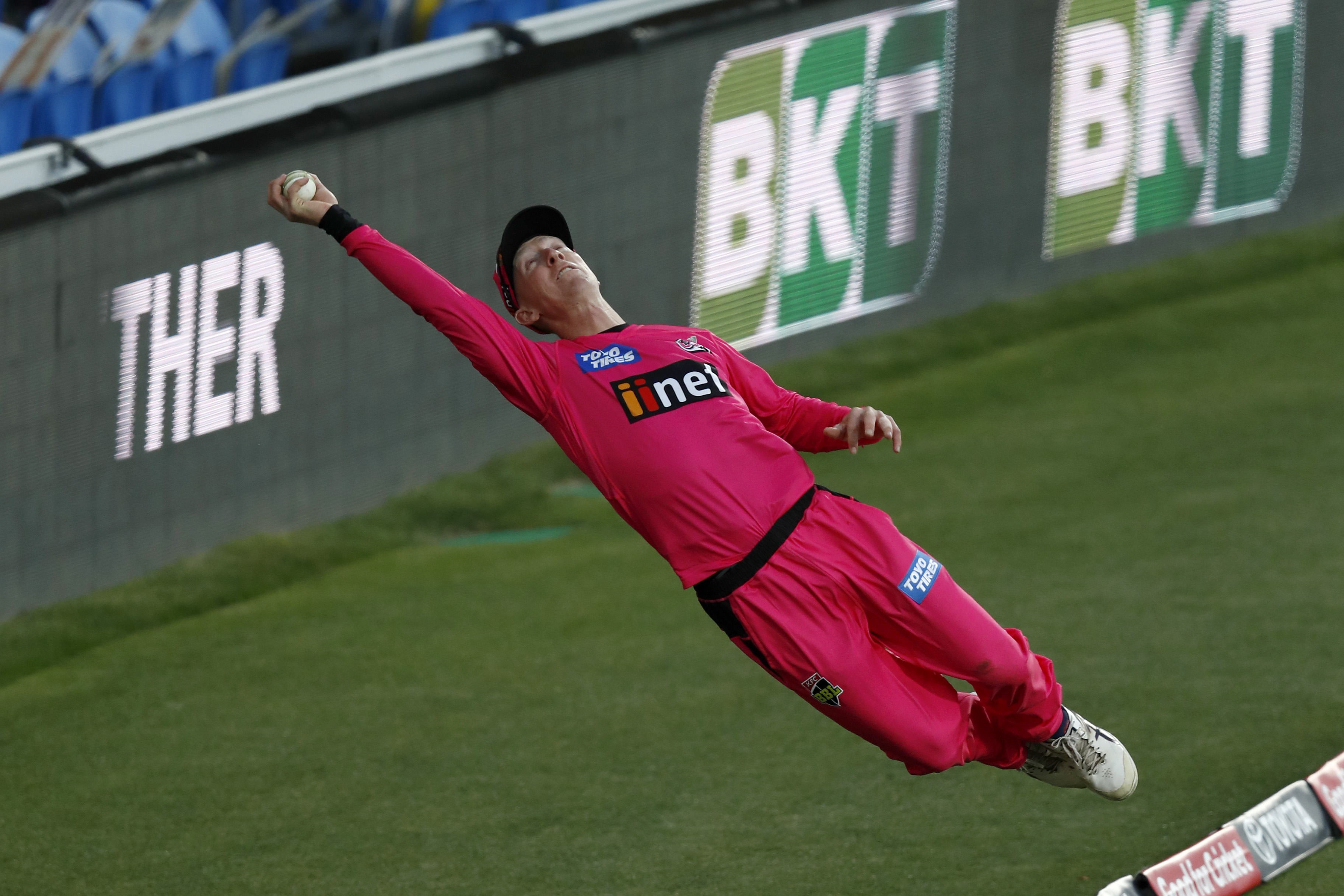 Enough of the excuses

“On July 8, at a near-deserted Rose Bowl, the West Indian and England teams took a knee. They were paying tribute to George Floyd, who had died at the hands of Minneapolis police a few weeks earlier, and to the Black Lives Matter message… It was quiet, digniﬁed and powerful – and one of the images of the year.

“Also that morning, Michael Holding and Ebony Rainford-Brent gave moving accounts on Sky Sports of their own experiences of racism. It was a moment to pause, and reﬂect. Players past and present had already begun telling stories of prejudice; the trickle became a torrent. The rule of thumb was simple, and brutal: if you weren’t white, you had suffered…

“For a while, cricket said and did the right things. The ECB admitted they had let things slip, and promised action… But cricket isn’t fond of radicalism (unless there is money to be made). Predictably, it lost its nerve. By the time Pakistan arrived, taking a knee had been quietly dropped, amid supposed concerns about the politicisation of BLM.

“Cricket has been here before: a sympathetic ear, a pat on the shoulder, a promise that things will change. They never do, but this time they must… By not taking a knee, cricket raised a ﬁnger.”

“If cricket’s response to racism is one of expedience rather than repudiation, everyone loses.”

“When Indian Test batsman Cheteshwar Pujara revealed in 2018 that his Yorkshire team-mates had christened him “Steve”, the news came and went. Apparently, they found his ﬁrst name hard to pronounce; Pujara was too polite to complain. Then it turned out he hadn’t been the only Steve at Headingley. As Yorkshire investigated allegations of racism from their former all-rounder Azeem Raﬁq, one ex-employee – Taj Butt – said the name was routinely given to “every person of colour”…

“But the Raﬁq case has conﬁrmed that self-examination does not always come easily to cricket… If cricket’s response to racism is one of expedience rather than repudiation, everyone loses.”

“Cricket is our national summer sport… In Channel 4’s heyday, Sky would exclusively broadcast one of the home Tests. Why not return the favour?”

“When Ian Bell signed off from ﬁrst-class cricket with 50 and 90 for Warwickshire at Cardiff in September, it meant every player from the 2005 Ashes had retired… Among current England cricketers, only James Anderson – who has been an international cricketer since 2002-03, but missed that series – had played a Test on free-to-air television.

“The gods of TV scheduling woke up: in February 2021, Channel 4 – for ever linked with the summer of ’05 – acquired the rights to England’s Test series in India. Providing punditry from a hurriedly assembled studio in London was Alastair Cook, whose entire Test career – 161 games and 12,472 runs – had taken place behind the paywall.

“The station’s last-minute re-entry into the big time was low on frills, but high on signiﬁcance. Despite little time to plan their broadcast or spread the word to fans who had almost forgotten watching an England Test on free-to-air telly, they secured a peak ﬁrst-day audience of 1.1m – more than twice what Sky managed during England’s tour of Sri Lanka. By day three, the ﬁgure had risen to 1.7m. In all, nearly 6m tuned in. Meanwhile, 44% of viewers were said to come from homes without a Sky subscription… Live Test cricket was now more accessible…

“Cricket is our national summer sport… In Channel 4’s heyday, Sky would exclusively broadcast one of the home Tests. Why not return the favour?” 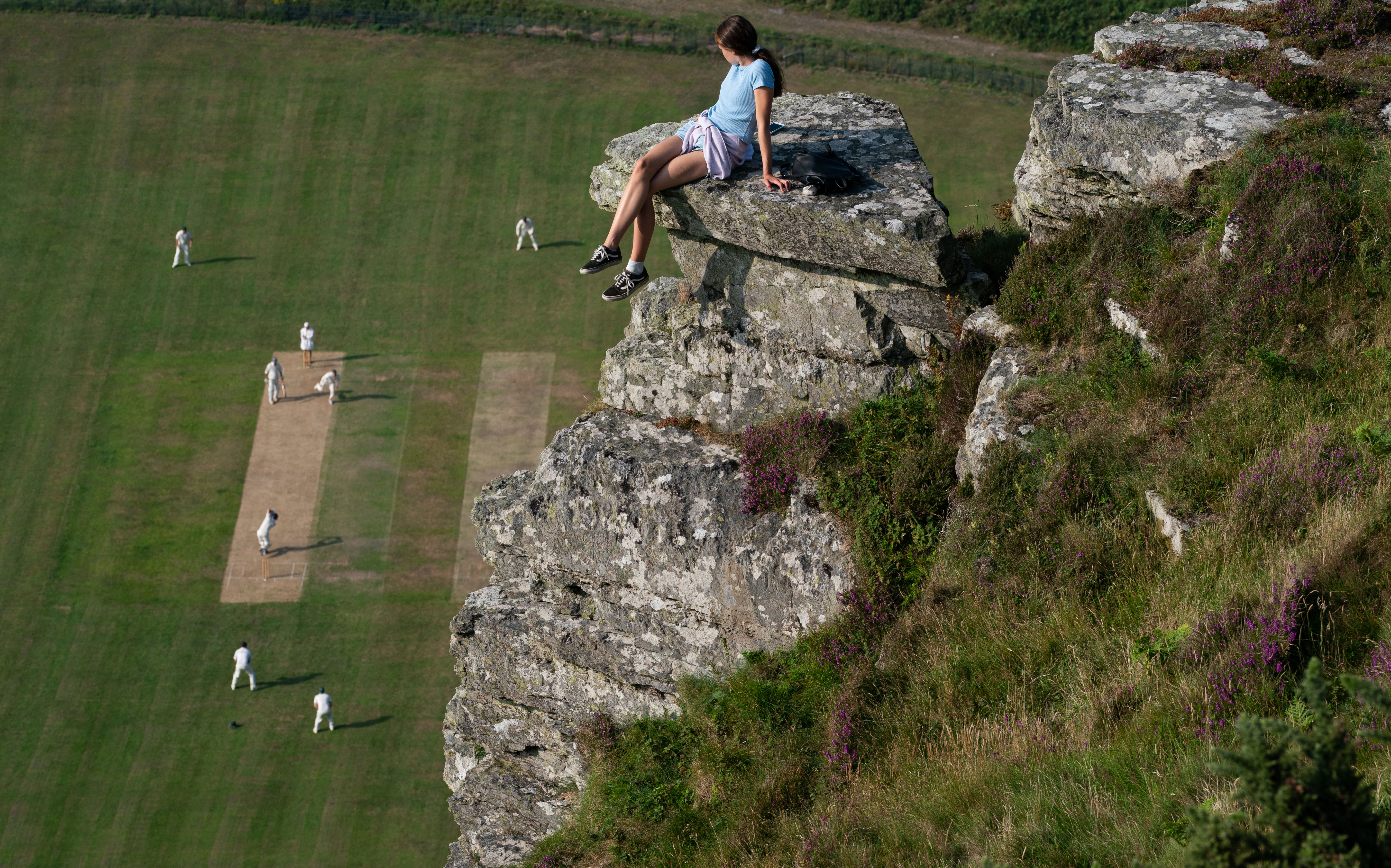 To mark 50 years of ODIs, Wisden names its greatest player for each decade:

Five Cricketers of the Year

Booth says: “Zak Crawley’s 267 against Pakistan in the Third Test at the Rose Bowl has been bettered only once by an England No. 3, when Walter Hammond made 336 not out at Auckland in 1932-33. It confirmed Crawley as a high-class strokemaker, which he underlined with centuries against Hampshire in both the Bob Willis Trophy and the T20 Blast.”

“Jason Holder was a giant both on and off the field last summer. After agreeing to lead his West Indies side on a tour of Covid-hit Britain, he inspired his team to victory over England at the Rose Bowl with first-innings figures of six for 42. Holder also led a dignified West Indian response to Black Lives Matter, taking a knee with his team-mates before each Test and wearing a black glove, a gesture that recalled American sprinters Tommie Smith and John Carlos at the 1968 Olympics.”

“Mohammad Rizwan was an electric presence behind the stumps for Pakistan, pulling off arguably the take of the summer when he caught Ben Stokes high to his left during the First Test at Old Trafford. He also averaged 40 with the bat, and was later confirmed as his country’s new captain.”

“Dominic Sibley regularly provided the glue England needed at the top of their Test order, not least when he made 120 in more than nine hours to help square the series against West Indies. In a difficult summer for openers, he batted for at least two and a half hours on five occasions, making life easier for those who followed.”

“At 44, Darren Stevens is Wisden’s oldest Cricketer of the Year since Leicestershire’s Ewart Astill in 1933. His 29 Bob Willis Trophy wickets for Kent at an average of 15 confirmed his status as one of the domestic game’s most enduring heroes.”

The Five Cricketers of the Year are chosen by the editor of Wisden, and represent a tradition that dates back to 1889, making this the oldest individual award in cricket. Excellence in, or influence on, the previous English summer are the major criteria for inclusion as a Cricketer of the Year. No one can be chosen more than once.

The Leading Twenty20 Cricketer in the World

“Kieron Pollard took T20 hitting to new heights in 2020, launching 59 sixes in the format’s various competitions at a rate of one every 5.5 balls. His strike-rate of 199 rewrote the rules – and all the while he averaged 53. Unsurprisingly, his teams prospered: Trinbago Knight Riders won the Caribbean Premier League, and Mumbai Indians the IPL. He has now won a record 16 T20 titles.”

The Leading Woman Cricketer in the World

“Beth Mooney was the Player of the Tournament at the women’s T20 World Cup, clinching the award with 78 not out in 54 balls to help Australia see off India in front of more than 86,000 spectators at the MCG. She was also the leading run-scorer at the Women’s Big Bash League in 2020-21, with 551.” 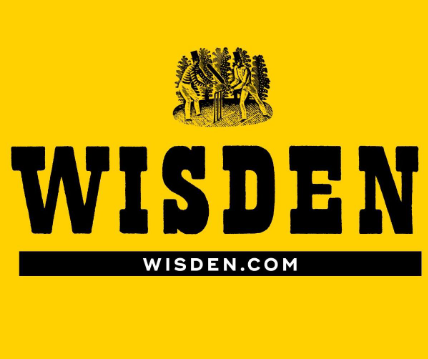 Wisden Book of the Year: This is Cricket by Daniel Melamud

·         Duncan Hamilton considers the effect of coronavirus on cricket

·         In a year when racism was rarely out of the headlines, Ebony Rainford-Brent writes powerfully about the need for greater diversity in cricket

And finally, from the index of unusual occurrences

Wisden 2021 is made up of 1,248 pages and nine parts, including Comment and Review sections which are the longest in Almanack history. The obituaries alone run to 85 pages. It has 129 contributors. Also within its pages are reviews of books, podcasts, blogs, television, print and social media, technology and the weather, as well as articles on cricket and the environment, and cricket in the courts.

The RRP of both the standard hardback and softcover editions of the 2021 Almanack is £55; the large format is priced at £75, and the leatherbound limited edition at £295. Wisden 2021 is also available as an abridged eBook, The Shorter Wisden, containing the best writing from the Almanack, at £15.00.