The ICC Cricket World Cup 2015 is about to begin, well nearly, each team has two official warm up matches over the next week first.  Then finally the 11th tournament in it's history will be under way with co-hosts New Zealand facing the 1996 World Champions Sri Lanka in the opening showpiece fixture in Christchurch.

With the limited amount of cricketing countries and grounds in the world, it is a somewhat surprise that this is the first time since 1992 the World Cup has been in both New Zealand and Australia, where they again co-hosted it.  With Australia's home advantage then, good form and fast bowlers on hard services can they make it a fifth win in total and a fourth win in the last five tournaments?

On that occasion back 1992, England reached their third final for the last time with the same outcome, a loss, so can they go one better this time in Oz?  Well the bookies along with the knowledgeable fans around the World would probably say no, and with recent poor performances, off the field issues around their line up and team selection it could just be the same old England.  Strange things can happen in cricket though and as long as the team believes, which I think they actually do this year, could they surprise quite a few people?

Of the seven teams that have played in every tournament since the inaugural one in 1975, only England (lost 3 finals) and New Zealand (lost 5 semi-finals) have yet to lift the ICC Cricket World Cup Trophy, could NZ finally change their “chokers” tag, they definitely have the skill and ability but just need to put it altogether as a team rather than individually.

Sri Lanka are wonderful to watch, they always seem to play as a team and make cricket look so simplistic and easy on the eye, I'm sure they'll be in the mix with the experienced players they have.  Along with the powerful South Africans who can destroy teams so quickly, especially with their captain and current ODI World number one batsmen A B de Villiers firing as we know he can. 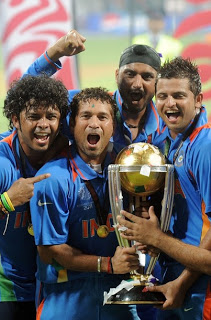 India have a slim outside chance of retaining their crown, but due to the conditions and not being too good on tour, similar to Pakistan, they both may struggle in the end. West Indies can beat anyone on a given day but can also capitulate quite easily, it's all down to confidence with them.  The rest of the teams making up the numbers, Bangladesh, Zimbabwe, Ireland, Scotland, UAE and a special mention to Afghanistan whom have qualified for the first ever time at this level, will all be looking for a major scalp or possibly two.