'not The Spin' fanzine

I've never really read much about the thoughts of Lancashire Cricket Club fans about their own team, but to be honest it's not actually something I thought I was missing in my life. I've read other general cricket magazines along with match reports on websites and I've listened to numerous pundits on the television give their opinion.

Then I heard there was a Lancs fanzine, excellent I thought. 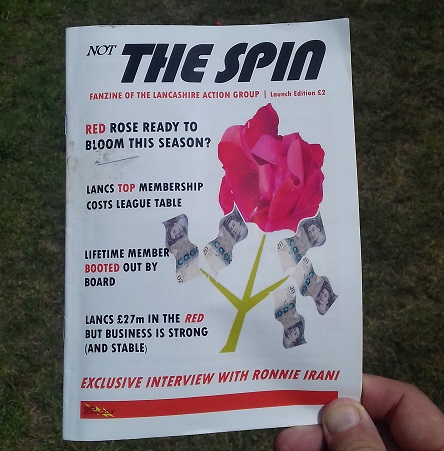 I've chatted to people in work about cricket of course, well those that would. Nearly everyone is a football fan, a few have opinions on the England cricket team and International cricket, but specific thoughts on LCCC? Hardly anything. I've only really had the pleasure of chatting domestic cricket and Lancs cricket with two, sometimes three people over the years.

I can still remember the day two of us were in the office of around fifty people on the day Lancashire finally won their first County Championship title in 77 years. We were the only ones with any interest and we followed it all day ball by ball on our laptops as the scored ticked over and the tension was intense. When we actually mentioned it to others what was going on, I'd have got more conversion out of people if I'd mentioned the weather.

Anyway, so when I heard about Lancs Action Group on Twitter I was intrigued and started to follow their updates, it was great to hear how open and honest their opinions of the club were and of course how the team on the field were doing too.

Clearly they have more knowledge of the ins and outs of the club than myself, but I wanted to know more. When I then heard they also had a fanzine to read I had to get myself one. The only other fanzine I read regularly is that of United We Stand (UWS), the Manchester United one which I've been reading for years, so why not a Lancs CCC one?

Now, no one wants to see their team or club criticised, but when it comes from genuine fans that want the best for their club and for their fellow Lancs fans, I can understand it. The same when they're praising the team and individuals on their performances, it's generally just good to hear different views and to get that little bit more of an opinion which allows myself then to pass judgement and decide what I think etc.

When the fanzine "not The Spin" arrived at my door fast and promptly I was pleased to see how good it looked and how thick it was. That surely could only mean thing, good content and I wasn't wrong. 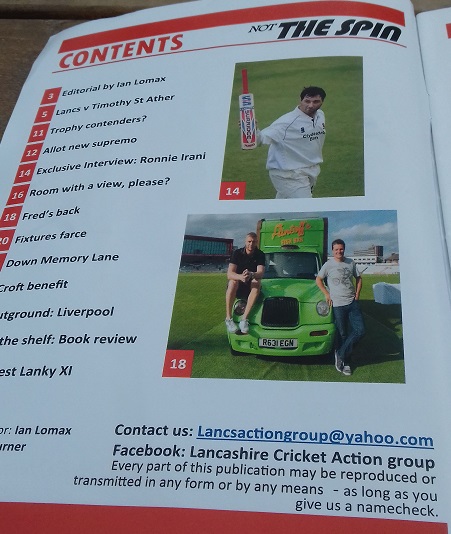 There were five bold headlines on the front page about what was inside the fanzine and all five interested me, so I got straight into it. I'd never heard of the MRG, I didn't know Lancs member prices were so high compared to other counties around the country, but I did know how bad the catering facilities have been. Having experienced it at both Lancashire and England games over the years. This was all stuff I read about in the opening pages, so if you want a copy of the remaining few first editions then please get in touch with them here. Otherwise the second edition is out this Monday.

The first edition isn't just about the club though, I learned about what happened to the Bolton cricket league and what's happening now at Aigburth cricket ground, a ground I have watched Lancs play at before. I've not actually been to Old Trafford or a Lancashire game this season as yet though, but I do have tickets to go to some in the next month.

Our 1st fanzine' not The Spin' was described as brilliant by esteemed writer @RoyMBE & our 2nd fanzine is now available to buy & we think it is even better! Available for just £2 & 69p p&p. Please DM us if you would like a copy. U can buy thro direct banking, paypal or cheque

Anyway, get yourself a copy of "not The Spin" and you too can read the views and opinions of the various contributors to the fanzine, it's a great read and I shall definitely be purchasing the second edition.

To get in touch with the Lancs Action Group, you can contact them on Twitter at @lancscccaction or through their Facebook page at Lancashire Cricket Action Group where you can pay easily through direct banking or paypal. 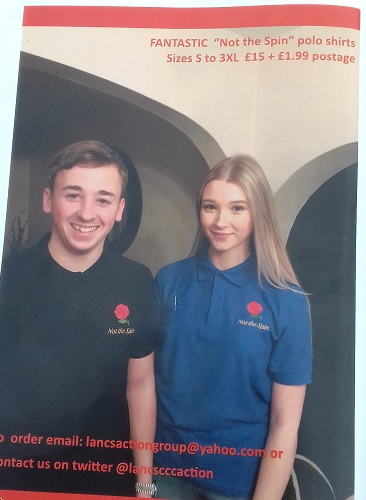