Bangladesh produced one of their finest ever comebacks to win the second Rocket Test Match and level the two match series at 1-1. This was their one and only Test victory against the Three Lions from England and they fully deserved it. It rounded off yet another all round hard thought Test Match.

Youngster Mehedi Hasan stood out for the hosts, incredibly taking two six-wicket hauls in the match. Whilst the tourists seemed to lose the plot and collapse like England team have in the past. They lost all 10 wickets for only 64 runs as Hasan did his thing with the ball to finish with 6-77 in the second innings.

England got off to a decent start in their second innings as they went looking for the win. Ben Duckett and Alastair Cook combined together with England on 100-0 at one point, needing just 172 runs to win the series. Those hopes of another Test Match victory were suddenly shattered though, as Bangladesh produced one of their finest ever bowling displays to leave the Three Lions all out for 164, what a performance. A great home win and another superb contest just like the first Test Match in Chittagong. 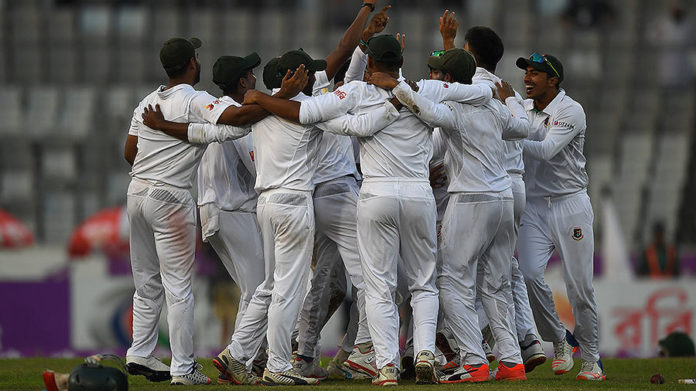 Trevor Bayliss told it like it was when he spoke to the press after his team's defeat by saying  “I don’t think from a batting or bowling point of view we were quite consistent enough.". Before adding “It’s good in one way that from the pluses and minuses we’ll be able to sit back and hopefully learn from the good things we did but also how we things we can do better."

Next up for England will be five Tests in India, starting in a few days in Rajkot, as they hope to emulate their last win back in 2012. The young up and coming Lancashire batsman Haseeb Hameed has been brought into the squad for the tour as well. However, his club team- mate James Anderson has been left out again as he is still recovering from his shoulder injury.